Strike A Light Game Hire is available for corporate events, exhibitions, events and parties across the UK.

Strike a light is a brand new game in the UK. A two player fastest reaction light chaser game. Strike a Light is a game that is a BATAK style game where reactions are tested and played against an opponent.

With two modes of play, Strike A Light offers guests the opportunity to play against an opponent in a head to head battle or who has the fastest reactions to switch lights off.

The games last over a 30 second period, so lots of guests can play on this free standing game. Our team member will record the guests scores, so a prize can be given to the highest scorers of the event.  This activity is a great spectator game and with its upbeat soundtrack and visual nature, is ideal for exhibition stands and launch events.

The space required is an area 6ft x 4ft to allow guests to play safely, and we will require access to a 13amp power supply.

Strike a Light game is designed for indoor use only. 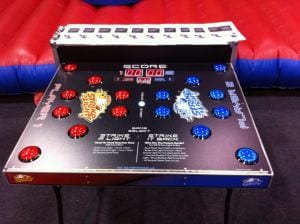 We can offer bespoke branding for this game, which includes branded score boards and branded table skirts for a small additional charge.